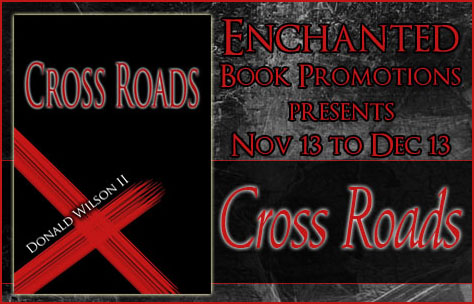 Today it’s time for an excerpt from a YA urban fantasy “Cross Roads”. I hope you enjoy the excerpt, it certainly put me in the reading mood!

The next morning, Decker sat in his black sedan hidden by its tinted windows. The information he had received from the tablet led him to the Garden Way Hotel. The hotel was new in the city on the Lower East Side of Manhattan. Decker held a camera in his hands like a photojournalist on assignment. He had taken pictures of everyone who had entered the hotel but only construction workers had entered.

Decker had been in place across from the hotel since dawn. Earlier that morning he had managed to place security cameras near the other entrances that fed directly into his computer. His laptop sat next to him in the passenger seat. Decker had views of the docking and loading area as well as the other entrances of the hotel. It was past eleven o’clock when Decker finally saw activity that interested him. A silver sedan pulled up in from of the hotel. The driver hurried out and opened the rear passenger door. The man who emerged from the backseat was tall, thin and had blonde hair that had been neatly combed back. He wore an expensive suit and a gray long coat. He looked to be in his late thirties and wore dark shades. Decker immediately recognized him and lowered the camera away from his face. His mouth gaped slightly.

“Linus.” he said aloud to himself as if to confirm what his eyes had just witnessed. He quickly raised the camera and rapidly took pictures. The driver led Linus inside. Decker made sure to get a picture of the car and

the plates as well. Decker was certain that whatever was going to happen would take place in this hotel and soon. He quickly turned his attention to his laptop and saw guards taking position at the entrances and securing the perimeter of the hotel.

Decker reached into his pocket and retrieved his cellphone. He hit a speed dial number and the phone picked up on the second ring. No one spoke on the other end. They didn’t have to.

“Roger that. Over and out.” replied the deep male voice on the opposite end.

Decker disconnected the call. Now, like a predator hunting its prey, Decker would play the waiting game with his target until it was time to strike.

Shawna is not a typical teenager.  Not only is she homeless and surviving in New York City on her wits and talents, but she is also the target of the Doma, a demonic race who appear human.  She believes that there is nothing remarkable about her, so why are they trying to kill her?

After barely escaping with her life, Shawna must ally herself with the only group capable of stopping them and keeping her alive.

Under the tutelage of Decker, and his personal assistant Gibbs, Shawna begins her intense training to become a member of this covert group.  They relocate to a small, rural town and Shawna manages to find friendship while gaining the attention of a charming and handsome young man.

Shawna’s new life is interrupted when her enemies discover her location and she is forced to put her training to the test.  Shawna comes to a deadly crossroads that will alter her life forever … if she can survive.

Donald Wilson II has been writing from a young age and has been published in numerous publications.  When he is not hammering at his computer and creating new stories or catching up on sports news, he can be found traveling across globe.  He lives in Westchester County, NY with his family and is currently working on book two of the CROSSROADS series.