Book Excerpt from The Luddite’s Guide to Technology 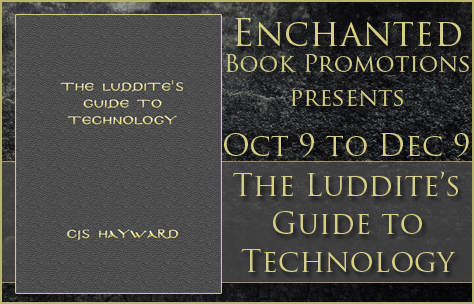 Today I’m sharing an excerpt from creative non-fiction book “The Luddite’s Guide to Technology”. The excerpt talks about Iphones and spirituality, and it’s quite intriguing. Enjoy!

I would like to talk about iPhones and spirituality, and what spirituality has to do with right use of things like iPhones. This may be a bit of an “opposing views” presentation to other points here; I hope the challenge is ultimately constructive.

My first point has to do with one of Rajeev’s points in our last meeting, of “Embrace your pain,” and what it really means for the iPhone, and more specifically how our use of technologies like the iPhone relates to spiritual work such as embracing your pain. Rajeev really made several excellent points in his lecture last time, and I’d like to pick up on just one: “Embrace your pain.” The iPhone’s marketing proposition is as a game changing technological drug that will help you dodge this spiritual lesson. Not to put too fine a point on it, but the iPhone is designed, marketed, and sold as a portable “Avoid spiritual work” system.

Is there any alternative to using various technologies to avoid spiritual work? Let’s look at recent history, the 1980’s, and how that decade’s technological drug is something we may now have some critical distance to look at. There is a classic Far Side cartoon that says in its caption, “In the days before television,” and shows a family hunched around an area on the blank wall where a television would be. The irony is that this wasn’t the days before television at all; the days before television were that much more dynamic and vibrant, and the cartoon was only what you get if you subtract television from the 80’s, when televisions had drained all of the life out of things. The distinction may be subtle, but there is a profound difference between those two versions of what it means to be without television, one vibrant and with people doing things and another with people bleakly staring at a wall—and this is why many people now have made an intentional and mindful decision to avoid television as a pack of cigarettes for the mind. Another Far Side cartoon, as best I can remember, shows an aboriginal tribesman standing on the opposite side of a deep chasm from a crowd of angry middle-class suburbanites, where a vine bridge has just been cut and fallen into the chasm, with a caption something like, “And so Umbuntu stood, the angry suburbanites stranded on the other side of the chasm. Their idol was now his, as well as its curse.” And the tribesman was holding a television. One wonders what the Far Side would say about iPhones after they had carved out their niche. And that brings me to my second point, what I call, “the timeless way of relating.” 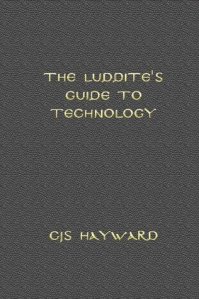 Title: The Luddite’s Guide to Technology 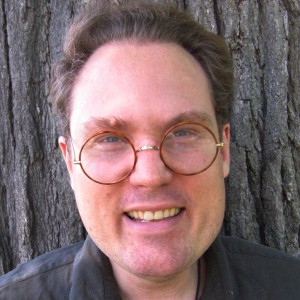 Some have asked, “If a much lesser C.S. Lewis were Orthodox, what would he be like?” And the answer may well be, “CJS Hayward.”

Hayward has lived in the U.S., Malaysia, England, and France, and holds master’s degrees bridging math and computers (UIUC), and philosophy and theology (Cambridge).