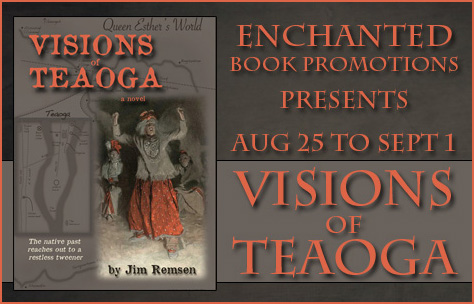 Are you a plotter or a pantser?

I’m definitely a plotter. It’s in my guts, from having been a newspaper journalist on deadline for 30 years. When you’re told you must file your story in 90 minutes and your boss demands, say, 600 words and no more, you can’t mess around, baby. So I want to know where I’m going and how each scene will lead to the next and how each character will blossom. I can’t imagine jumping in and writing a scene out of order, without having already spelled out the events and emotional interplay that got the characters to that point. Once I’ve laid things out chronologically, I’ll often want to go back to fiddle and fine-tune, even mid-way through the draft, but beyond that there’s no way my brain would let me be a pantser.

Where did you get the inspiration for Visions of Teaoga?

Teaoga kind of spoke to me on a visit there, much as it speaks to my modern protagonist, the Texas girl Maddy Winter. Teaoga is the Indian name for an important spot on the Susquehanna River in northern Pennsylvania. On a road trip a few years ago, I visited that spot and learned about all the dramatic things that had happened there in the 1700s. And I was frankly annoyed that I’d never been taught any of this fascinating history as a schoolboy since I’d grown up in not too far away from there. So, being a trained writer and an avid student ofhistory, I decided to bring Teaoga’s story to life, particularly for students.

Is this a series?

No – unless readers demand it! I do wonder how storybook Maddy’s next school year will be, and even if she’ll ever return to Teaoga, but I can just have fun imagining it in my head. As for the Teaoga area, there’s an intense story to tell about how the settlers fought among themselves, for real. But right now, I’m involved in some other history research that takes me away from that time and place.

What is your daily page or word count record?

Wow, I’ve never tracked that or even been asked about it. But there were many days were I got locked in and wrote through the dinner that I’d promised  to prepare for the family – oops, is it really 7 o’clock already? On those monster days, I probably cranked out four thousand words. But generally, half of my book time would be spent mentally noodling where the next scene would go, and reviewing my research both to be sure it was accurate and to look for little historical gems that I could work into the narrative.

Please tell us a little about your book.

First, I’ll give you an official summary, and then some personal thoughts.

The book is based on dramatic events in Indian-settler history in the 1700salong the upper Susquehanna River. It is a multicultural saga that weaves together the adventures of an actual American Indian leader known in history asQueen Esther and a fictional modern-day middle schooler named Maddy Winter–with a dash of time travel thrown in.

The story takes place in 1790 with Queen Esther returning under cover to Teaoga, the site of her burned village. It is overrun with white settlers. Esther, honored by her people but hunted by the settlers as a killer, has come to secretly observe a U.S.-Iroquois peace council. While there, she stealthily provides a circle of Indian women with her lessons of survival and mentors a troubled native girl in the ways of leadership.

Moving ahead to the present day, young Maddy visits the same place, now quiet little Athens, on a summer trip. An inquisitive girl, she grows fascinated with Teaoga’s lost world and its inhabitants, chief among them the mysterious Esther. Encounters with the locals, including a colorful historian and two adventurous boys, send Maddy headlong into exploring this crossroads of civilizations. As the parallel stories unfold, sparks begin flying across the centuries. Increasingly, Maddy’s journey into history becomes a journey of self-discovery. By the end, she has taken on Esther’s mantle of the “peacewoman” and sets out to heal a hurt she has caused back home.

On a personal note, let me say that Visions of Teaoga is not your average middle grades story. I want it to be a fun read, with the modern young characters goofing around and dabbling in time travel. It’s also a teaching book, with lots of historical truths baked into it. It’s very multicultural, looking at early American history from an Indian point of view.  And I did something I haven’t seen elsewhere: I have the kid characters sit and actually cook up lesson plans for teaching this history to other middle schoolers.

A big theme I hope readers pick up on in borders: historical borders between Indian and white; between tribe and tribe; between settler group and settler group; and between the coexistence era and the time of mutual race hatred; also, Maddy is on a personal border as she comes of age in her own life. So the book will give the reader a workout on intellectual, emotional and ethical levels.

Finally, while Maddy is a good kid, the history she learns about is dark and dangerous. In that way I think of Visions as Disney Meets dystopia.

What is your favorite story of all time?

Unfair question! I just spent half an hour staring at the sky trying to figure out an answer. Trouble is I’ve read scads of books and reacted to different things at different ages. So let me go all Oscar-nominee on you and put it this way. As a little squirt, it would be Scrooge comic books. As an adolescent, Conrad Richter’s Light in the Forest (about a white boy adopted by Indians)gripped me. As a teen, my mind was expanded forever by Alan Paton’s Cry the Beloved Country (about black South Africa). As a young adult, I loved My Antonia, a hypnotic story of a Plains family by Willa Cather. As a history researcher, I was enthralled by Conrad Richter’s beautiful trilogy of settler life The Woods, the Fields,the Town. As a read-aloud parent, I (and my 3 boys) were all bedazzled by Harounand the Sea of Stories by Salman Rushdie.

And, if pressed, I’ve gotta go with Haroun as my all-time bestest. Ifyou haven’t read it yet, you’re cheating yourself.

What are you working on right now?

I’m preparing to give a talk in my Pennsylvania hometown about some other fresh research I’ve done. It involves the Underground Railroad and the fact that a dozen fugitive slaves and their sons who’d found sanctuary in this town left this safety and returned south as Union ‘Colored Soldiers’ in the Civil War. Nearly all of them were wounded or otherwise broken in body by the war. I’ve tried to chronicle these dozen men and bring a little bit of honor to them. It may lead to a book as well. 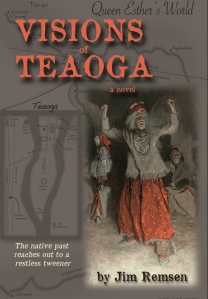 Visions of Teaoga is a historical novel for young readers that weaves together the adventures of an actual American Indian figure known as Queen Esther and a fictional middle schooler named Maddy, with a dash of time travel thrown in. By revisiting the drama of Eastern borderland upheaval in the 1700s, the book is appropriate as supplemental required reading in middle-school US history classes. By adding Maddy and her modern sensibilities to the telling, it helps us consider how we might regard the Indian-settler legacy in our own time. Here’s a summary:

The year is 1790. Esther returns under cover to Teaoga, the site of her burned village. It is overrun with white settlers. Esther, honored by her people but hunted by the settlers as a killer, has come to secretly observe a U.S.-Iroquois peace council. While there, she stealthily provides a circle of Indian women with her lessons of survival and mentors a troubled native girl in the ways of leadership.

Moving ahead to the present day, our young Maddy visits the same place, now an out-of-the-way hamlet on the New York-Pennsylvania border, on a summer trip. Diffident yet curious, she grows fascinated with Teaoga’s lost world and its inhabitants, chief among them the mysterious Esther. Encounters with the locals, including a colorful historian and two extraordinary boys, send Maddy headlong into exploring this crossroads of civilizations. As the parallel stories unfold, sparks begin flying across the centuries. Increasingly, Maddy’s journey into history becomes a journey of self-discovery. By the end, she has taken on Esther’s mantle of the “peace woman” and sets out to heal a hurt she has caused back home.

Visions of Teaoga is a hybrid work, part supernatural page-turner, part detailed history textbook. As Jim says, “While I certainly want the book to be engaging and fun, my underlying purpose is to have kids confront this lost world and appreciate the little-taught, often surprising ways so many of the native cultures came undone. The Teaoga locale is a perfect microcosm of that important multicultural history, but there are similar examples  everywhere. It’s all part of our rich local history, glowing underfoot, waiting to be explored.” 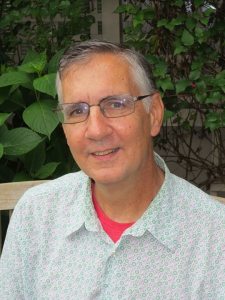 Jim Remsen is an editor and author who is pursuing a lifelong interest in history following his award-winning journalism career. At The Philadelphia Inquirer, Jim rose through the ranks to become the newspaper’s Religion Editor. He and his reporters won national awards during his tenure, with the Religion Newswriters Association honoring his Faith Life section as one of the top two religion sections among major North American newspapers.

Visions of Teaoga is Jim’s second published book, and comes after a long pause since his successful first venture. In the 1980s, soon after becoming a father, Jim saw the need for a hands-on guidebook about interfaith marriage. He and a journalist friend spent an action-packed year researching and writing The Intermarriage Handbook: A Guide for Jews and Christians. The book was released to wide acclaim, and nearly a quarter-century later remains in print (with HarperCollins) as a successful bible for mixed-faith couples.

Jim lives outside Philadelphia with his wife, Harriet. They have three adult sons.