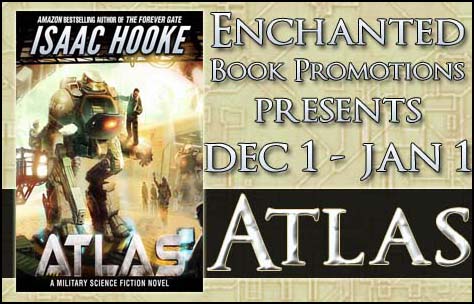 Today’s post is an excerpt and giveaway. The featured book is “Atlas”, a military science fiction novel by Isaac Hooke. Enjoy the excerpt!

Oh, and merry Christmas everyone!

“You look older, more mature,” Shaw said. “That’s good, I suppose. But there’s something else. The way you move. This look you have in your eye. Like you know some secret no one else knows. Like you’ve seen things. Bad things. I guess, I guess it’s the air of a killer.”

I shook my head. “You’re priceless, as usual Shaw.”

“Isn’t that what they train you to be in that special forces of yours? The MOTHs?” She said that word with a disdain that was surprising. “You’re all killers, aren’t you?”

I sat up, and dangled my legs over the edge of the bunk. “Look, sure, I’ve made a few kills in the war, but I’m not a killer. You’re jumping to conclusions. I’m a soldier. A warrior. And there’s a difference.”

“Is there?” She didn’t sounded convinced. Not at all.

“It’s not propaganda. It’s what I believe, Shaw.”

“You know how to kill someone in a hundred different ways, and how you move shows that you’re well aware of that fact. You can’t tell me you’re not a killer.”

“Sure, maybe I’m more confident now,” I conceded. “But listen, Shaw, trust me. The Rules of Engagement won’t let us target innocents. We’d all go to jail if we did. Everything that happens on a battlefield is recorded by our Implants. We have thousands of military lawyers reviewing battle footage day in and day out. If I shot down someone who wasn’t a baddie, I wouldn’t be here with you today. I’d be in cuffs. All right?”

She was quiet for a moment.

“I take it you’re not a big fan of the war in Mongolia,” I said.

I sat up on the bunk. “I was a warrior when you first met me, you know. A Bruiser. A protector of the innocent. I just wasn’t trained up. Just hadn’t gone to war. But I’m the same now, even after everything. I’m the same man inside. Maybe a little bit more confident on the outside, but the same. Shaw, look at me. Look at me.” She did. “I’m the same.”

She couldn’t hold my gaze for long.

When she answered, her voice sounded so far away: “I can’t believe it’s been two years. Feels like a lifetime.”

“It didn’t have to be this way. If you had gotten in touch back on Earth, instead of avoiding me…” I felt my face flush as I remembered our last chat session on Earth, when I’d told her how I felt about her. A strange mix of emotions ran through me. Anger, embarrassment, disappointment. “I never forgot that one time we were about to meet up, and you canceled on me at the last minute. Why’d you do it, Shaw? Is it because you were seeing this officer dude of yours?”

“Um, he’s not an officer,” Shaw said. “That would be fraternization.”

And then suddenly I knew. “There’s no one, is there?”

She sighed, staring at her folded hands. “Not now, no.”

“Why say there was, then? Why throw away everything we had? Everything we could have had?”

She couldn’t meet my gaze. Just stared at her hands, twining and untwining her fingers. “No one could ever measure up.”

She didn’t answer. Didn’t look up.

“Well, maybe it’s time you got over yourself, and came back down to Earth to live with the rest of us mortals.”

She shook her head. “You don’t understand.” I couldn’t believe it. It sounded like she was crying. “My expectations are high because of you.” She looked up at me finally. Definitely tears. “No one could ever measure up to you.”

Rade Galaal enrolls in the hardest military training known to man to become a member of the MOTHs, the most elite fighting unit in the galaxy. MOTHs are tacticians, corpsmen, snipers, astronauts and commandos rolled into one. They also happen to pilot the atomic-powered ATLAS mechs, specialized military hardware that brings new meaning to the phrase “one-man-army.”

When Special Warfare Command orders MOTH Team Seven on a covert operation 8,000 light-years beyond the furthest reaches of explored space, Rade realizes he’s signed up for more than he bargained for…

Isaac Hooke is the author of the upcoming military science fiction novel, ATLAS. His experimental genre-bending action novel THE FOREVER GATE was an Amazon #1 bestseller in both the science fiction and fantasy categories when it was released in May 2013.

He’s been writing since 1997, and he has a degree in Engineering Physics.

ATLAS comes out Christmas 2013. Sign-up to be notified here: http://bit.ly/atlaslist

In the meantime, you can check out a couple of short stories set in the ATLAS universe:

and “Caterpillar Without A Callsign” – http://www.amazon.com/dp/B00GZJQQUS/

Go here to participate in the giveaway.